Precious original woodblock print made by the famous artist Utagawa Hiroshige (歌川広重) in a period between 1850 and 1851. The work is dedicated to the Yoshiwara (吉原) station, shows two captions indicating the “Fuji to the Left” (左りふじ) and the “Former Market Site” (元市ば) and is the fifteenth (十五) print of the series “Tokaido Road: The Fifty-three Stations” (東海道 五十三次之内) produced by the publisher Tsutaya Kichizo (蔦屋吉蔵), owner of Koeido (紅英堂).

The Yoshiwara station (吉原宿) was originally located near the present-day homonymous station, on the modern Tokaido Main Line (東海道本線) railway, but after two very destructive tsunami, the town was relocated further inland. Although most of the route of the Tokaido in Sagami (相模) and Suruga (駿河) provinces was along the seashore, here travelers walked away from the sea. Also, up until this point on the journey, Mount Fuji could always be seen to the right of the travelers coming from Edo (江戸). However, as they traveled inland, they could see Mount Fuji to their left, and the view came to be called “Fuji to the Left” (左富士). During the Edo period (江戸時代), there was also a long colonnade of pine trees lining the route along this point, as we can see in this print.

The print on Japanese washi paper (和紙), despite the presence of some small woodworm holes, two of which restored on the lower margin, is in overall good condition. 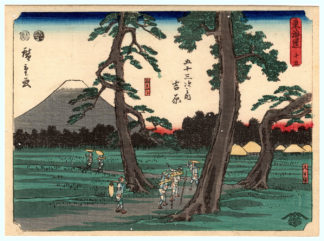