Important woodblock print by the artist Utagawa Kunisada (歌川国貞) depicting the bloody death of Shirai Gonpachi (白井権八), the destitute samurai who, corrupted by a tragic love for the beautiful Komurasaki (小紫), will be driven to lead a dissolute life and to commit infamous crimes. The story of Gonpachi, who is played here by actor Onoe Kikugoro III (三代目尾上菊五郎), has been featured in several kabuki (歌舞伎) plays. In this rare print, a version of the ending is presented in which the man, hunted by the authorities surrounding him on the banks of the river, decides to take his own life with his sword, rather than face capture and public execution.

In the upper right inset we read several details: the woodcut is entitled “Oe no Hanchu Shirai Gonpachi” (大江の藩中しらゐ権八), is taken from the series “The Titles and Scenes from Kabuki Dramas” (踊形容外題尽) and depicts the “eighth act” (八まく目), set in the “ferry area on the Rokugo rive” (六郷川渡船の場), of the play “The Lifetime of Onoe Kikugoro III” (斧柄梅樹一代噺), which was performed at the Ichimura-za (市村座) theater in Tokyo “on the very auspicious day of July of the fourth year of the Koka era [1847], in the [forty-fourth] Hinoto-Hitsuji year of the sexagenary cycle” (弘化四丁未年七月大吉日).

The fine print, produced in December 1856 by the publisher Minatoya Kohei (湊屋小兵衛), despite the presence of a tiny hole on the right bank and a general aging of the paper which also manifests itself in small cracks on the partially trimmed margins, is in overall good condition. 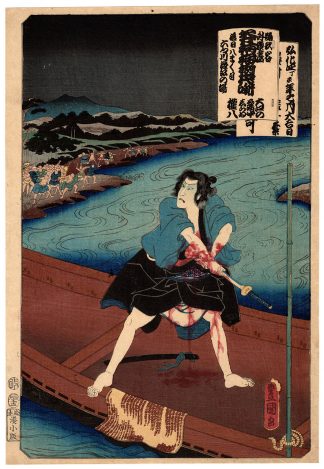 You're viewing: THE SUICIDE OF SHIRAI GONPACHI (Utagawa Kunisada) $944.00
Add to cart