Important original woodblock print made in 1811 by the artist Kikukawa Eizan (菊川英山) and depicting two women, probably a geisha (芸者) in the company of her young assistant, beside an ishidoro (石灯篭) stone lantern. The work is taken from a refined series entitled “Fashionable Five Colors of Thread” (風流五色糸) and is paired with the black (黒ヵ) color.

Eizan (1787 – 1867) was the most prolific, longest-lived and ultimately the best of the late followers of Kitagawa Utamaro (喜多川歌麿), who attempted to carry on the bijin (美人) style of the master after the death of the latter, occurred in 1806.

The rare print, of vertical large oban (大判) format, was produced by the publisher Sanoya Kihei (佐野屋喜兵衛), owner of Kikakudo (喜鶴堂), and shows evident signs of aging, in particular points of paper thinning, and a partial trimming of the margins. 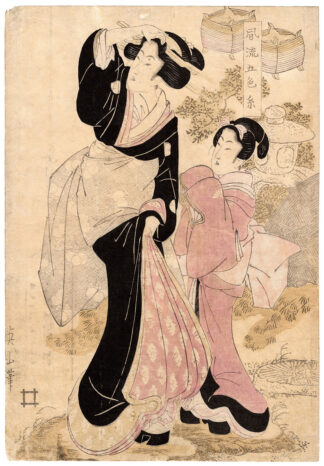