In the last scene of the famous “Tale of the Bamboo Cutter” (竹取物語) it is said that princess Kaguya (かぐや姫), before returning to her home on the moon, left behind an elixir of immortality for the emperor who however, overcome with sadness and since did not wish to live forever without being able to see her, ordered to burn the elixir on the top of the mountain closest to the sky: this is why, according to legend, the name of Mount Fuji derives from the word “fushi” (不死), that is “immortality”.

In the woodblock print presented here, entitled “The Old Tale of the Bamboo Cutter” (竹取ノ古事), the artist Hyodo Rinsei (兵藤林静) depicts the scene in which the elderly bamboo cutter Taketori no Okina (竹取の翁) meets for the first time the little princess; the artist Iijima Koga (飯島光峨) is, instead, the author of the evocative view of Fuji from the perspective of Yoshiwara (吉原), in the ancient Suruga Province (駿河).

The work, taken from the series “Calligraphy and Pictures for the Fifty-three Stations” (書画五拾三駅) printed in 1872 by the publisher Sawamuraya Seikichi (沢村屋清吉), shows evident signs of aging and in particular woodworm holes, a vertical center fold mark and two further folds in the lower corners. 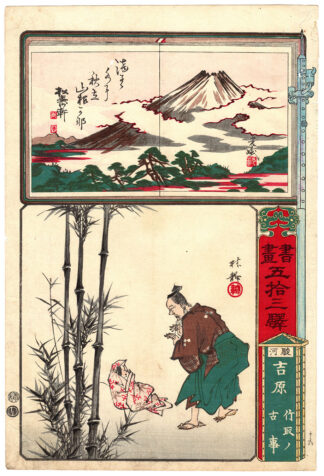