THE SAMURAI TAKASUGI AND THE POETESS NOMURA (Mizuno Toshikata)

The samurai and hero of the Meiji Restoration (明治維新) Takasugi Shinsaku (高杉晋作), exiled from the Choshu Domain (長州藩), arrives in February 1864 at the home of Nomura Boto (野村望東), a poetess and a loyalist who at the age of 54 had lost her husband and had become a priestess and who is also known for her political activism against the Tokugawa shogunate (徳川幕府).

This fine large vertical format polychrome woodblock print, made by the artist Mizuno Toshikata (水野年方), is taken from the series “Instruction in the Fundamentals of Success” (教導立志基), a long list of heroes and heroines depicted by seven different artists and who were regarded as standards of moral leadership and self-realization.

The work, produced in November 1890 by the publisher Matsuki Heikichi (松木平吉), despite the presence of slight fold marks, is in very good general condition, thanks also to an effective relining carried out on the back. 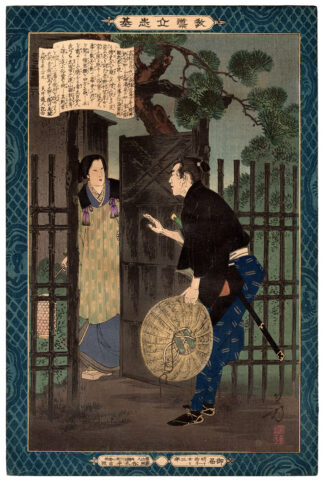 You're viewing: THE SAMURAI TAKASUGI AND THE POETESS NOMURA (Mizuno Toshikata) $213.00
Add to cart