Polychrome woodblock print of vertical chuban (中判) format made by the artist Utagawa Hiroshige II (二代目歌川広重) and depicting the Tatsukushi (龍串) coast, in the ancient Tosa Province (土佐国). At the center of the evocative landscape, a real treasure of rock formations with fascinating shapes sculpted by the wind and waves of the Pacific Ocean over the centuries, the Sennin Cave (仙人洞).

The work was printed in February 1862 and is the fifty-seventh panel of the series “Shokoku rokujuhakkei” (諸国六十八景), that is “Sixty-eight Views of the Various Provinces”, produced by the publisher Tsutaya Kichizo (蔦屋吉蔵), owner of Koeido (紅英堂).

The print on Japanese washi paper (和紙), despite the right signs of aging and a small woodworm hole on the left margin, is in good condition, thanks also to an effective relining carried out on the back. 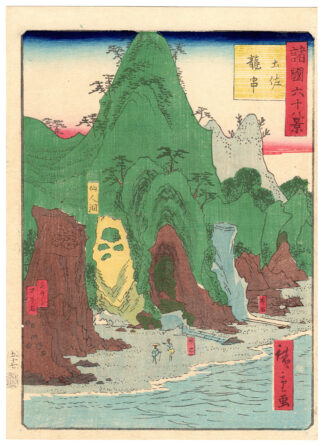