Beautiful original woodblock print made by the artist Tsukioka Yoshitoshi (月岡芳年) and depicting Princess Chujo (中将姫), a semi-legendary figure sometimes called the “Japanese Cinderella”, and the spirit of her wicked stepmother represented as a snake. The lotus flowers are a reference to the legend according to which Chujo, who had become a nun to escape the wrath of her stepmother, wove in a single night the lotus thread mandala depicting the cosmography of the Pure Land (浄土).

The work, taken from the series “Twenty-four Paragons of Imperial Japan” (皇国二十四功), is entitled “Chujo-hime of Taima-dera Temple” (当麻寺の中将媛) and is presented here in an edition produced in March 1893 by the publisher Matsuki Heikichi (松木平吉), owner of Daikokuya (大黒屋).

The print on Japanese washi paper (和紙), despite the right signs of aging including a small hole in the upper left, is in good general condition. 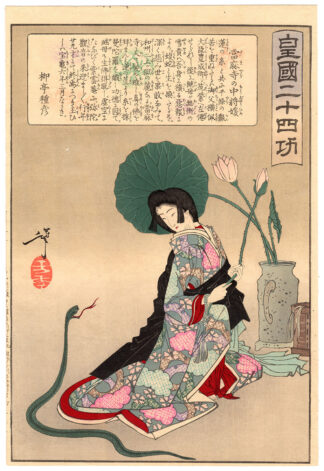 You're viewing: PRINCESS CHUJO AND THE SNAKE SPIRIT (Tsukioka Yoshitoshi) $548.00
Add to cart