A samurai and two bijin (美人) beauties, during an excursion, pause to look at a waterfall. Japanese culture attributes to the waterfalls a significant symbolic and religious value: these in fact, as well as the forests or the mountain tops, are believed to be the natural home of the kami (神) deities and, often, are part of the sacred sites and routes of pilgrimage.

The print on Japanese washi paper (和紙), despite some signs of aging including slight stains, is in overall good condition. 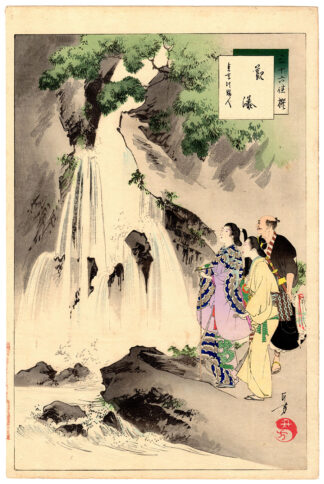 You're viewing: VIEWING A WATERFALL (Mizuno Toshikata) $259.00
Add to cart