Large vertical format humorous woodblock print made by the artist Utagawa Yoshiiku (歌川芳幾) and taken from the “Comical Record of Japanese History” (滑稽倭日史記), a series created to celebrate the successes of the First Sino-Japanese War (日清戦争) with a parody of the folkloric “Night Parade of One Hundred Demons” (百鬼夜行).

In the upper part of the work, we see depicted three ghostly women and four demonic creatures. In the lower part, various caricatures of the vanquished enemies and three Japanese soldiers: a first with the likeness of the Thunder God, a second dressed in kimono and a third depicted as a naval officer entreated by the Chinese ships.

The print on Japanese washi paper (和紙), produced in July 1895 by the publisher Akiyama Buemon (秋山武右衛門), owner of Kokkeido (滑稽堂), despite the right signs of aging is in overall very good condition. 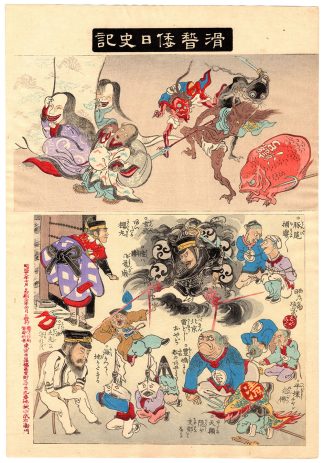