The reason why this bijin (美人) beauty by the artist Utagawa Yoshitora (歌川芳虎) holds an umbrella in her right hand is to be found in the upper left inset of the work in which we see depicted, in addition to the famous Yuranosuke (由良之助) that is the theatrical transposition of the leader of the forty-seven ronin (四十七士), also the popular character Ono Sadakuro (斧定九郎), that is the fascinating bandit who, in the kabuki iconography, often appears dressed in a black kimono and holding a “snake’s eye” umbrella janomegasa (蛇の目傘).

The rare woodblock print of vertical large oban (大判) format, made in 1847, is taken from the series “Parody of Chushingura” (見立忠臣蔵) and is dedicated to the “Act Four and Five” (四段目五段目).

The print on Japanese washi paper (和紙), despite the obvious signs of aging, is in overall good condition. 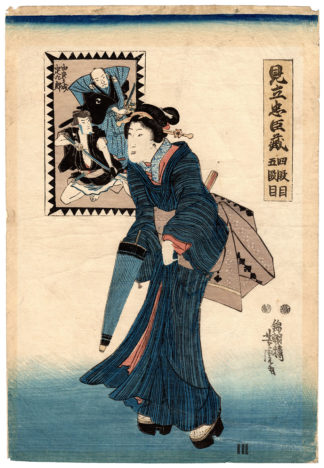