The new building of Shintomiza (新富座), the theater managed by the legendary Morita Kanya (守田勘弥) who was the leading Japanese theatre manager of the first half of the Meiji period (明治時代), was completed in 1878 and was an excellent example of the new tendencies of kabuki (歌舞伎) architecture: for the first time many conveniences of Western architecture were adopted such as, for example, the use of gas lamps which would have had a decisive effect both upon methods of staging and on illumination, including street lighting and, as we see in this print, even on the realization itself of the inaugural sign that we could define as a predecessor of modern neon.

This interesting polychrome woodblock print of vertical large oban (大判) format was made by the artist Utagawa Hiroshige III (三代目歌川広重) and is titled “The Grand Opening of Shintomiza Theater and Its Fabulous Gas Lights” (新富座開業式 花瓦斯燈). The work, produced in August 1878 by the publisher Asano Eizo (浅野栄蔵), is taken from the series “Illustrations of Famous Places in Tokyo” (東京名所図絵).

The print on Japanese washi paper (和紙), despite the presence of slight wrinkles and fold marks as well as a small restoration in the upper part, is in overall good condition. 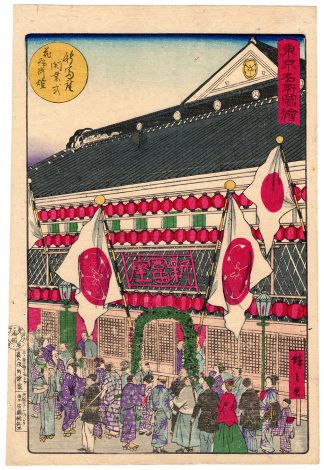