The work, titled “The Mishimaya Restaurant at Kanasugi in Shiba” (芝金杉 三島屋), is taken from the “Tokyo Restaurants with Some Fancy Dishes” (東京料理頗別品), a series that in the title contains a play on ideograms that allude to Tokyo cuisine but also, and maliciously, to the beautiful women of the capital.

The print on Japanese washi paper (和紙), despite the right signs of aging including a slight pressure mark of a paper clip on the left of the top margin, is in good condition thanks also to an effective relining carried out on the back. 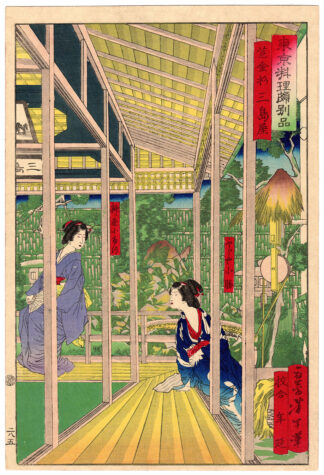 You're viewing: THE MISHIMAYA RESTAURANT (Tsukioka Yoshitoshi) $466.00
Add to cart