THE HOUR OF THE DRAGON (Kitagawa Utamaro)

It is the hour of the dragon (辰ノ刻), about eight in the morning. Normally it would be time to get up, but the two young yujo (遊女), who shared the same futon (布団), seem to want to laze a little more under the covers and chat. The lying woman plays with her kanzashi (簪) hairpin. Beside the mattress some objects of their daily life: kaishi (懐紙) paper tissues, a chawan (茶碗) bowl and a kiseru (煙管) pipe.

The woodblock print of vertical large oban (大判) format, originally produced around 1794 by the publisher Tsutaya Juzaburo (蔦屋重三郎), owner of Koshodo (耕書堂), is taken from the famous series “The Twelve Hours in the Houses of Pleasure [in the Yoshiwara District]” (青楼十二時 続) made by the artist Kitagawa Utamaro (喜多川歌麿).

The work presented here is a fine woodblock reprint of the second half of the 20th century made, as we read in the seal on the back, by the prestigious Adachi Hanga (アダチ版画) in Tokyo and, despite a slight fold and gluing residues both on the left margin, is in overall very good condition. 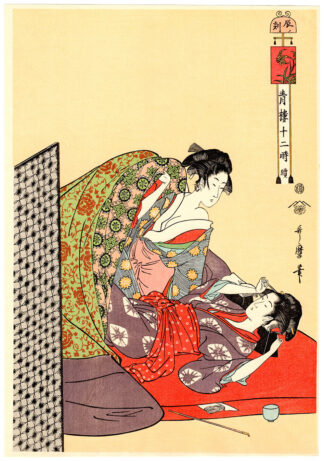 You're viewing: THE HOUR OF THE DRAGON (Kitagawa Utamaro) $180.00
Add to cart