THE FLAMES OF PASSION (Utagawa Kunisada)

Fine polychrome woodblock print made in 1852 by the artist Utagawa Kunisada (歌川国貞) and depicting the actor Bando Shuka I (初代坂東しうか) playing the role of Princess Hanako (花子姫), portrayed here as a beggar on the banks of the Sumida River (隅田川) after becoming a nun with the name Seigen-ni (清玄尼), following the news that her beloved Matsuwakamaru (松若丸) would marry her younger sister, Princess Sakura (桜姫).

The work, entitled “Fire: The Flames of Passion in the Heart” (煩悩の胸の火), was printed by the publisher Ebisuya Shoshichi (恵比寿屋庄七), owner of Kinshodo (錦昇堂), and is taken from the series “Collection of Exemplars of the Five Elements” (擬五行尽之内).

The print on Japanese washi paper (和紙), despite the presence of a couple of tiny holes and slight fold marks, as well as a thin fiber trapped by pigments in the center of the woman’s hat, probably since the original printing stage, is in good condition, thanks also to an effective relining carried out on the back. 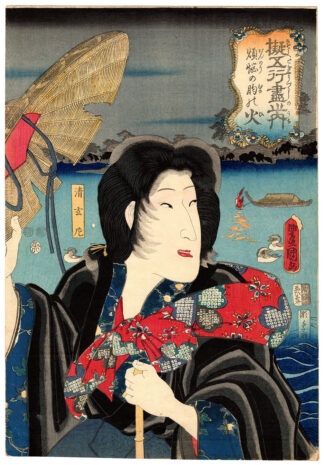 You're viewing: THE FLAMES OF PASSION (Utagawa Kunisada) $600.00
Add to cart