Refined original woodblock print of the kuchi-e (口絵) type taken from vol. 6 n. 3 of the famous literary magazine Bungei Kurabu (文芸倶楽部). The work was made by the artist Tomioka Eisen (富岡永洗) as the frontispiece of the novel “Bachiatari” (罰あたり), that is “The Cursed”, by the writer Tsukahara Jushien (塚原渋柿園).

The print on Japanese washi paper (和紙), produced in February 1900 by the Hakubunkan (博文館) publishing house, despite the right signs of aging, is in very good general condition. 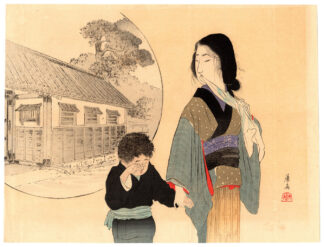