THE CAPTURE OF MORONAO (Utagawa Kunisada)

Compelling woodblock print depicting the capture of Ko no Moronao (高師直) during the legendary assault of the forty-seven ronin (四十七士) on his residence. Moronao, fictional name of Kira Yoshinaka (吉良義央), after long searches was found hidden in a woodshed, which we see here in the upper right behind the title box, but nobody was sure of his identity, since he refused to declare his name. Then Oboshi Yuranosuke (大星由良之助), on the left, confirmed his identity when his men, with lanterns, illuminated his face where the scar caused by the blow inflicted by En’ya Hangan (塩冶判官) was still clearly visible.

The precious print presented here is dedicated to the eleventh act (十一段目) of the play inspired by the heroic deeds of the forty-seven samurai entitled Chushingura (忠臣蔵), “The Treasury of Loyal Retainers”, and is taken from a homonymous series of prints made by the famous artist Utagawa Kunisada (歌川国貞).

The work, produced in June 1854 by the publisher Tsutaya Kichizo (蔦屋吉蔵), owner of Koeido (紅英堂), and by the carver Tsuge Shojiro (津下庄治郎), despite the signs of aging including some paper wrinkles and a restoration in the central part, is in overall good condition. 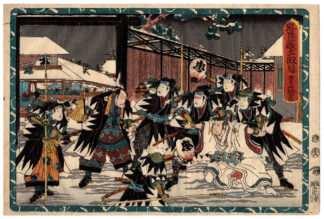 You're viewing: THE CAPTURE OF MORONAO (Utagawa Kunisada) $242.00
Add to cart