Coming out / from Tagonoura, / I see pure white / on the snow-covered peak / of Mount Fuji (田子の浦ゆ / うち出でてみれば / 真白にそ / 富士の高嶺に / 雪は降りける). As early as the 8th century, the poet Yamabe no Akahito (山部赤人) was trying to describe his amazement at the magnificent view from Tagonoura (田子の浦) bay, in the modern Shizuoka Prefecture (静岡県), whose port holds the distinction of being the closest port to the sacred mountain.

In the beautiful woodblock print presented here, taken from the series “Collection of Views of Famous Places in Japan” (日本名所図会), the artist Kobayashi Kiyochika (小林清親) multiplies, if possible, the unchanging charm of Fuji by depicting its reflection on the underlying waters.

The work, produced in February 1897 by the publisher Matsuki Heikichi (松木平吉), owner of Daikokuya (大黒屋), despite some signs of aging including a tiny thinning of the paper in the upper left and a small spot under the title inset, is in overall very good condition. 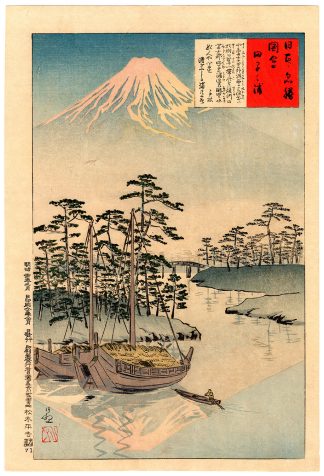