Beautiful woodblock print of the musha-e (武者絵) type, taken from the series “Taiheiki Supplements” (太平記拾遺) by the artist Utagawa Yoshiiku (歌川芳幾) and entitled Miyata Kihachi (宮田喜八), another name of the samurai Miyata Mitsutsugu (宮田光次), a vassal of the Hashiba clan (羽柴氏). Mitsutsugu was one of the umamawari (馬廻) horse guards of the famous Toyotomi Hideyoshi (豊臣秀吉), to whose service he entered in the year 1573. The brave warrior met his death a few years later, in May 1578, during the campaign against Bessho Nagaharu (別所長治) at Miki Castle (三木城).

Taiheiki (太平記), the “chronicle of the great peace”, is a literary work of the fourteenth century attributed to the monk Kojima (小島法師) which narrates the intrigues and political struggles that, between 1318 and 1367, divided Japan for succession to the empire. In the title of the series presented here, in Japanese “Taiheiki Shui”, the word “Taiheiki” was used in order to avoid the censorship of the government by simulating a reference to facts from a remote past but, instead, were described the protagonists of the civil wars of the 16th century.

The print on Japanese washi paper (和紙), produced in 1870 by the publisher Hirookaya Kosuke (広岡屋幸助), despite the right signs of aging and the presence of small imperfections and a restoration on the partially trimmed margins, is in good condition. 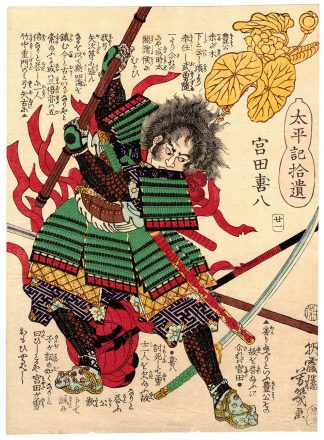