Fascinating original woodblock print made in January 1877 by the artist Toyohara Kunichika (豊原国周) and depicting Minamoto no Yoshitsune (源義経), played by the actor Ichikawa Danjuro IX (九代目市川団十郎). The famous samurai is presented here in the guise of a yamabushi (山伏) warrior monk, to recall the period in which, on Mount Kurama (鞍馬山), he learned the kenjutsu (剣術) art of the sword from the legendary Sojobo (僧正坊), the king of tengu (天狗), the spirits of the mountains and forests of Japanese folklore.

The work, produced by the publisher Takegawa Seikichi (武川清吉) and by the carver Ishikawa Ginjiro (石川銀次郎), is taken from the “Twenty-four Examples of the New Civilization” (開化廿四好), an interesting and rare series in which the artist pairs kabuki portraits with small scenes presenting modern inventions or modernized activities from the Meiji era (明治時代): in this case the theme is that of the thermometer (寒暖斗) and the pairing is between the silhouette of the man who, in the upper inset, together with his wife, is admiring his new technological acquisition and the classical iconographic representation of the aforementioned Sojobo, whose long prominent nose is recalled by the long instrument that the man holds in his lap.

The print is in very good general condition, thanks also to an effective relining carried out on the back with another sheet of Japanese washi paper (和紙). 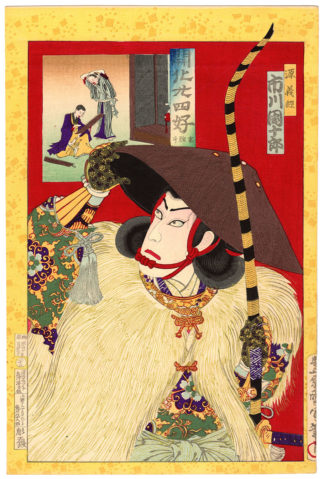 You're viewing: MINAMOTO NO YOSHITSUNE (Toyohara Kunichika) $242.00
Add to cart