The playing children / exclaim in chorus: / four and five / and we will have reached / the last square (四つ五つ / ふればあがると / 子供等が / みな口々に / いひてあそべり). The words of the kyoka (狂歌) poem by Baikodo Nerikata (梅香堂煉方), written in the upper part of the work, accompany this depiction of the Minakuchi station (水口宿) in which we see some very enterprising women, intent on dragging travellers into teahouses and inns for the night. The verses are a pun on the name of the aforementioned station, as well as on the succession of the post stations of Tokaido which are compared to the squares of an ideal game of the goose.

This precious woodblock print, made between 1840 and 1842 by the artist Utagawa Hiroshige (歌川広重), is the fifty-first panel of the “Fifty-three Stations of the Tokaido Road” (東海道五拾三次), a series also known as the “Kyoka Tokaido” (狂歌入東海道) due to the presence, precisely, of poetic compositions combined with the stations of the famous route that connected Edo (江戸) or today’s Tokyo (東京), the shogun’s capital, with the imperial capital Kyoto (京都).

The print on Japanese washi paper (和紙), produced by the publisher Sanoya Kihei (佐野屋喜兵衛), owner of Kikakudo (喜鶴堂), despite the right signs of aging including some tiny holes, is in overall good condition. 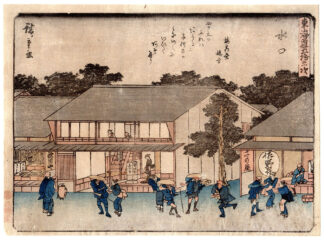