Osumi no Kata (おすみの方) was the daughter of General Honda Tadakatsu (本多忠勝). She was married to the samurai Sanada Nobuyuki (真田信之) who, when he was a child, had been given by his father as a hostage of the Tokugawa (徳川). In 1600, at the time of the Battle of Sekigahara (関ヶ原の戦い), Nobuyuki’s father and younger brother had opposed the Tokugawa forces and Osumi no Kata was asked to deliver a secret message to secure alliances and gain reinforcements for the line of defense in Annaka (安中).

In this beautiful woodblock print taken from the series “Embroidery Pictures, Comparison of the Day and the Night” (東錦昼夜競), made in 1886 by the famous artist Toyohara Chikanobu (豊原周延), we see her depicted in the camp of her husband’s troops.

The print, made by the publisher Kobayashi Tetsujiro (小林鉄次郎), despite the right signs of aging and in particular a general patina and some slight signs of wrinkling of the paper, is in overall good condition. 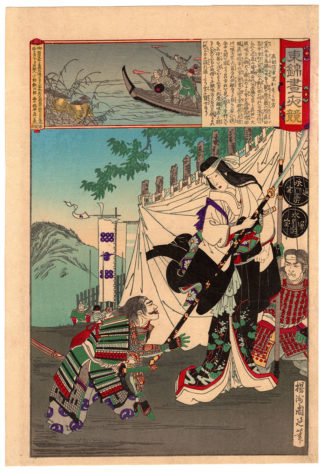