Beautiful woodblock print of the musha-e (武者絵) type, taken from the series “Taiheiki Supplements” (太平記拾遺) by the artist Utagawa Yoshiiku (歌川芳幾) and entitled Hatano Kiriwaka (泰桐若), fictional name of the historical character Hatano Kiriwakamaru (秦桐若丸). The warrior, a retainer of the Kuroda clan (黒田氏) and who was said to have the strength of ten men, is depicted during the battle of Yamazaki (山崎の戦い) knocking down his enemies whom he used to terrorize by grafting a gunbai (軍配) war fan on a three meter pole, thus highlighting his presence on the battlefield.

Taiheiki (太平記), the “chronicle of the great peace”, is a literary work of the fourteenth century attributed to the monk Kojima (小島法師) which narrates the intrigues and political struggles that, between 1318 and 1367, divided Japan for succession to the empire. In the title of the series presented here, in Japanese “Taiheiki Shui”, the word “Taiheiki” was used in order to avoid the censorship of the government by simulating a reference to facts from a remote past but, instead, were described the protagonists of the civil wars of the 16th century.

The print on Japanese washi paper (和紙), produced in 1870 by the publisher Hirookaya Kosuke (広岡屋幸助), despite the right signs of aging, is in overall very good condition. 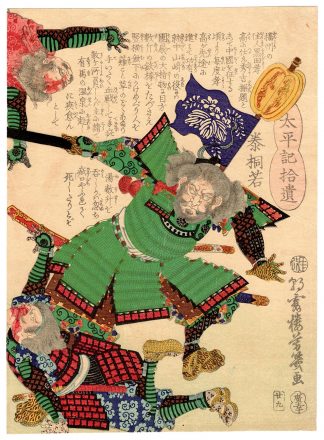