Minamoto no Yoshiie (源義家), also known as Hachimantaro (八幡太郎), was a Minamoto clan (源氏) samurai of the late Heian period (平安時代), and Commander-in-chief of the defense of the North (鎮守府将軍). Model of courage and warrior skill, here we see him depicted during a famous episode in his life when, noticing a flock of wild geese rising from a field, he sensed the presence of enemies and managed, therefore, to prevent his army from falling in an ambush.

This fine large vertical format polychrome woodblock print, made by the artist Kobayashi Kiyochika (小林清親), is taken from the series “Instruction in the Fundamentals of Success” (教導立志基), a long list of heroes and heroines depicted by seven different artists and who were regarded as standards of moral leadership and self-realization.

The work, produced in 1886 by the publisher Matsuki Heikichi (松木平吉), despite the right signs of aging and in particular a slight stain on the lower part of the sheet, is in overall good condition. 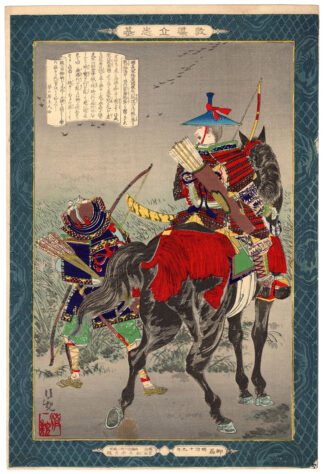 You're viewing: HACHIMANTARO AND THE FLOCK OF GEESE (Kobayashi Kiyochika) $313.00
Add to cart