The samurai Shirai Gonpachi (白井権八), fleeing the Tottori domain (鳥取藩) where he had committed a murder, is intercepted in the gloomy execution ground of Suzugamori (鈴ヶ森) by a gang of rascals disguised as bearers and determined to get the big reward offered by the Edo (江戸) police. But the young fugitive is saved by the moon, which is suddenly hidden by a big cloud, plunging the place into a dense darkness and allowing the samurai to get rid of his pursuers by neutralizing them with his katana (刀).

The fine print, produced in July 1856 by the publisher Fujiokaya Keijiro (藤岡屋慶次郎), owner of Shorindo (松林堂), despite the right signs of aging and the partially trimmed margins, is in good condition. 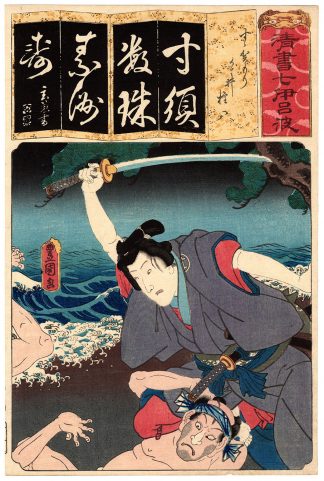