Charming large format woodblock print depicting an eagle owl (鴟鵂) spreading its wings on the branch of a hinoki (扁柏) cypress in a moonlit night. The work is taken from the volume “Autumn” (秋) of the famous “Keinen Kacho Gafu” (景年花鳥画譜), the album in 4 volumes of flowers and birds made in 1892 by the artist Imao Keinen (今尾景年).

The print on Japanese washi paper (和紙), produced by the publisher Nishimura Sozaemon (西村總左衛門), despite the right signs of aging and the presence of binding holes, is in good general condition. 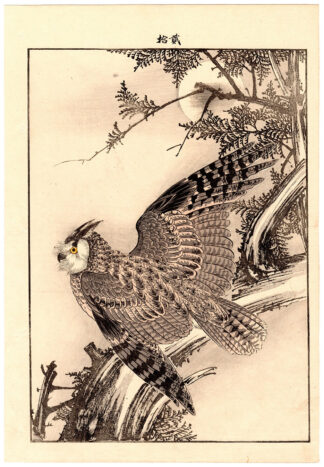