Elegant woodblock print of the kuchi-e (口絵) type made by the artist Tomioka Eisen (富岡永洗) as the frontispiece of vol. 2 (下巻) of the “Collection of Japanese Women’s Etiquette” (日本女礼式大全), by the writer Tsuboya Zenshiro (坪谷善四郎), and depicting three Heian (平安) style court ladies writing poems on tanzaku (短冊) paper strips.

The print, produced in August 1897 by the Hakubunkan (博文館) publishing house, despite the obvious signs of aging on the Japanese washi paper (和紙) and some slight bends in the lower left corner, is in overall good condition. 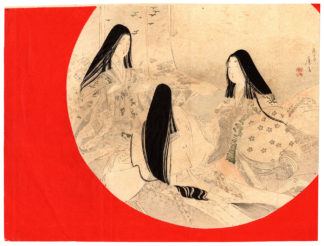