BENKEI AT THE BRIDGE (Tai Koun)

Original woodblock print of the late 19th century depicting the famous duel, which took place on the Gojo Ohashi Bridge (五条大橋) in Kyoto, between Musashibo Benkei (武蔵坊弁慶), the warrior monk whom we see here wielding a naginata (薙刀), and Ushiwakamaru (牛若丸), that is a very young Minamoto no Yoshitsune (源義経), disguised as a woman and who will finally prevail and will earn the services of Benkei who, defeated in a duel for the first time and by a younger and weaker opponent, will swear eternal loyalty to him and will follow him throughout his life.

The work is entitled “Benkei at the Bridge” (橋弁慶) and is taken from the series “Images of Dancing Figures” (踊姿絵) made by Tai Koun (田井耕耘), a student and then wife of the famous artist Ogata Gekko (尾形月耕).

The print on Japanese washi paper (和紙), produced in January 1899 by the publisher Matsuki Heikichi (松木平吉), despite the right signs of aging is in overall very good condition. 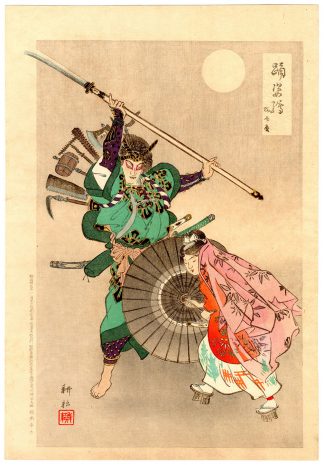