Fine ukiyo-e (浮世絵) woodblock print of vertical large oban (大判) format made in 1884 by the artist Toyohara Kunichika (豊原国周). The work, taken from the series “The Fifty-four Chapters [of the Tale of Genji] in Modern Times” (現時五十四情), is inspired by the twentieth chapter “Asagao” (朝顔), or “Morning Glory”, of the masterpiece of Japanese literature written in 11th century by the court lady Murasaki Shikibu (紫式部).

The title of the print derives from one of the protagonists of the aforementioned chapter, Asagao no Himegimi (朝顔の姫君), one of the few women in the novel who decides not to give herself to Genji (源氏); a virtuous lady, well aware of her reputation and not at all willing to be counted among the many conquests of the prince.

The fine woodcut, produced by the publisher Takekawa Seikichi (武川清吉) and by the carver Asai Ginjiro (浅井銀次郎), despite the right signs of aging, is in overall very good condition. 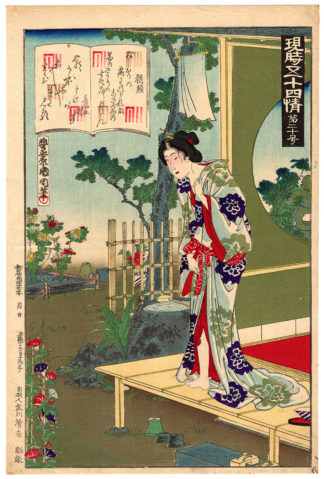