Fine kuchi-e (口絵) woodblock print made by the artist Tomioka Eisen (富岡永洗) as frontispiece of the novel Shiratsuyu (志ら露), ie “White Dew”, by the writer and literary critic Goto Chugai (後藤宙外). It is an autumn night and a young fiancée, in front of the entrance to a garden, looks at her beloved who walks away under the moonlight.

The print on Japanese washi paper (和紙), produced in November 1898 by the publisher Shunyodo (春陽堂) in Tokyo, despite a slight halo and a small drop of pigment on the woman’s neck, is in good condition. 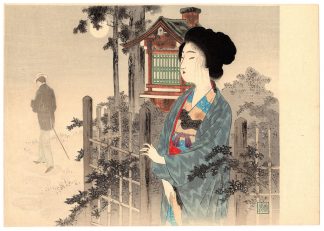