In occupied Taiwan, the Japanese colonial governor is led to believe, by an envious subordinate officer, that his wife is having an affair with another officer. In a fit of jealousy the governor, whom we see depicted here approaching his unaware victim with a knife hidden behind his back, will kill his wife. When he finally realizes the woman’s innocence, he will decide to repair his crime by taking his own life.

The print, produced in October 1895 by the Hakubunkan (博文館) publishing house, despite the obvious gluing residue visible on the back, on the front is in very good general condition. 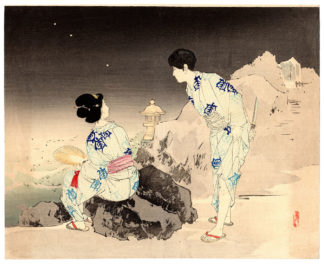