Important original woodblock print of vertical large oban (大判) format, made by the artist Utagawa Kuniteru (歌川国輝) and produced, in a period between 1848 and 1855, by the publisher Shimizuya Tsunejiro (清水屋常次郎). In the rare work we see depicted two of the most famous characters of Japanese folklore and mythology: the fisherman Urashima Taro (浦島太郎) and the Dragon Princess (龍女) Otohime (乙姫), daughter of the god of the sea.

That of Urashima Taro is the story of a fisherman rewarded for rescuing a turtle, and carried on its back to the Dragon Palace (龍宮城) beneath the sea. There he is entertained by the princess Otohime as a reward. He spends what he believes to be several days with the princess, but when he returns to his home village, he discovers he has been gone for hundreds of years. And when, finally, he opens the forbidden jewelled box (玉手箱), given to him by Otohime on his departure, he turns into an old man.

The print, taken from the series “Biographies of Japanese and Chinese Handsome Men” (和漢美男伝), despite the right patina of time and the presence of small holes and a restoration on the left margin, is in overall good condition. 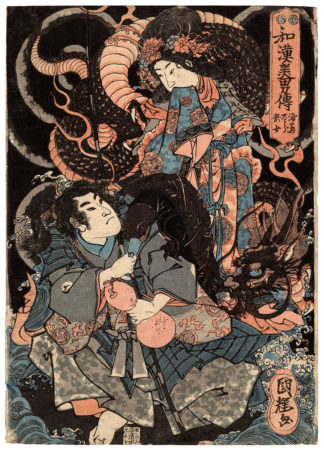 You're viewing: URASHIMA TARO AND THE DRAGON PRINCESS (Utagawa Kuniteru) $754.00
Add to cart