Tsubosaka-dera (壺阪寺), literally the “jar on the hillside temple”, owes its name to the legend of its foundation, according to which in 703 the monk Benki (弁基) found, in the place where he had established his hermitage, a lapis lazuli jar that contained a thousand-armed Kannon (千手観音) statue. The statue gave Benki healing powers with which he cured the Empress of her eye disease and she, in turn, rewarded him by building Tsubosaka-dera, which became the temple for eye cures and eye health.

The woodblock print presented here, entitled in the left margin “Yamato Province, Tsubosaka-dera” (大和壺阪寺) and depicting two pilgrims at the entrance gate under a crescent moon rising over the forest, is a 1989 ca. edition of the work made in 1950 by Kawase Hasui (川瀬巴水), one of the most famous representatives of the “new prints” shin-hanga (新版画) movement.

The print on Japanese washi paper (和紙), produced by Watanabe Shozaburo (渡辺庄三郎), the famous publisher with whom Hasui collaborated during the forty years of his artistic career, is in very good general condition. 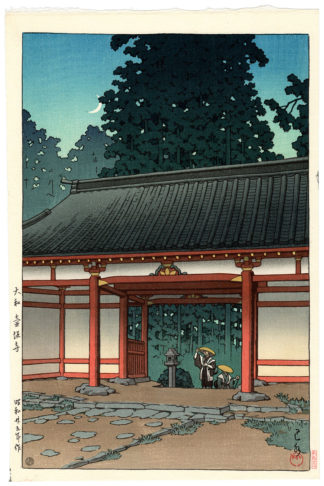