Minamoto no Tametomo (源為朝), also known as Chinzei Hachiro Tametomo (鎮西八郎為朝), was a samurai of the late Heian period (平安時代). He is known in the epic chronicles as a powerful archer and it is said that he once sunk an entire ship with a single arrow, by puncturing its hull below the waterline. It is also added in many legends that his left arm was about 10 cm longer than his right, enabling a longer draw of the arrow, and more powerful shots.

The print on Japanese washi paper (和紙), despite some signs of aging, is in good condition, thanks also to an effective relining carried out on the back. 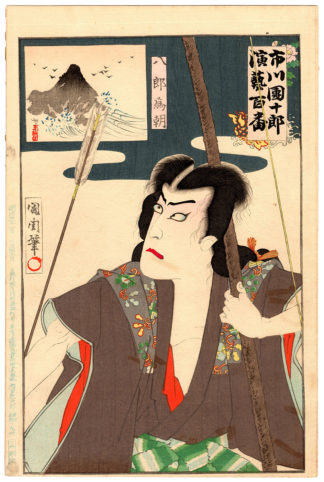