The woodblock print on Japanese washi paper (和紙) is presented here in a precious edition of the 21st century made, as we read in the seal on the right margin, by the historic company Unsodo (芸艸堂) in Kyoto and is in very good condition. 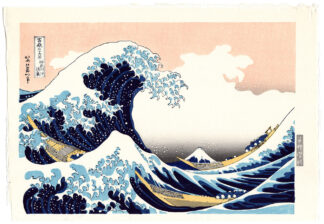 You're viewing: THE GREAT WAVE OFF KANAGAWA (Katsushika Hokusai) $250.00
Add to cart