Very rare triptych of woodblock prints made by the artist Utagawa Kuniteru III (三代目歌川国輝) and depicting the legendary female warrior Tomoe Gozen (巴御前) receiving the kosode (小袖) garment of her lord Minamoto Kiso Yoshinaka (源木曽義仲) who, during the Battle of Awazu (粟津の戦い) in which he would lose his life, presaging the defeat had ordered her to leave the battlefield. Tomoe had protested fiercely, but in the end she gave in and obeyed, vanishing into the forest.

The work was produced in 1891 by the publisher Yazawa Hisakichi (矢沢久吉) and the carver Horisada (彫定) and is titled “Lady Tomoe Receives a Keepsake and Obeys Lord Kiso” (鞆繪女かたみを贈りて木曽殿に和かる).

The prints on Japanese washi paper (和紙), despite the right signs of aging including slight stains and folds as well as the presence of small restorations, are in fair condition. 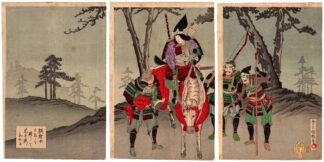