Compelling triptych of woodblock prints made to celebrate the Japanese victory at the Battle of Lüshunkou (旅順口の戦い), a land battle fought on 21 November 1894 between the troops of the Empire of Japan (大日本帝國) and the forces of the Qing dynasty (清朝) during the First Sino-Japanese War (日清戦争). Lüshunkou was considered impregnable thanks to its fortifications but, after several hours of resistance, it was forced to surrender and the defenders had to leave their positions, abandoning many pieces of artillery in the hands of the Japanese.

The prints on Japanese washi paper (和紙), despite the right signs of aging, are in overall very good condition. 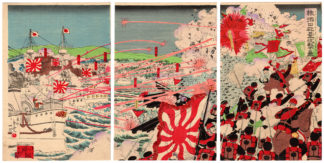 You're viewing: THE BATTLE OF LÜSHUNKOU (Nagashima Shungyo) $221.00
Add to cart