Interesting original woodblock print of the “shini-e” (死絵) type, memorial portrait of the young actor Suketakaya Kodenji I (初代助高屋小伝次), passed away the 24th of August 1899 in his sixteenth year of age. A rising star in Tokyo of the late 19th century, he had been expected to become a great kabuki actor. The famous writer Okamoto Kido (岡本綺堂) wrote about him: «His style of acting was out of proportion to his age. How he would have developed later on in life as an adult could only be guessed at. Anyway, even at his youthful age he was certainly an actor of royal pedigree».

The rare woodcut was made by the artist Toyohara Kunichika (豊原国周) and printed on September 2, 1899 by the publisher Ishii Rokunosuke (石井六之助). In the upper part we read, in addition to a farewell poem, the name of the actor, his age and his posthumous name “Koshoin Tsutayo Masaaki Koji” (高照院傳誉政明居士).

The print, despite the obvious signs of aging and, in particular, signs of bending and rippling of the Japanese washi paper (和紙), is in overall fair condition. 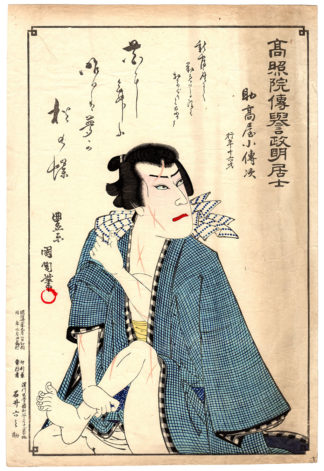