Refined kuchi-e (口絵) frontispiece entitled “Soei” (疎影), that is the Japanese expression that indicates the “sparse shadow” cast by the plum tree, and made in February 1910 for the vol. 16 n. 3 of the famous literary magazine Bungei Kurabu (文芸倶楽部). The artist Suzuki Kason (鈴木華邨) depicts a young woman intent on hanging on a flowering branch a wish written on a tanzaku (短冊) paper strip.

Suzuki Kason (1860 – 1919), although known to collectors mainly for his xylographic frontispieces, indeed rather rare to find, was above all a prolific painter of traditional style, as well as a member of the Imperial Academy of Fine Arts (帝国美術院).

The woodblock print, produced by the Hakubunkan (博文館) publishing house, presents a general and evident aging of the Japanese washi paper (和紙), visible in particular on the margins. 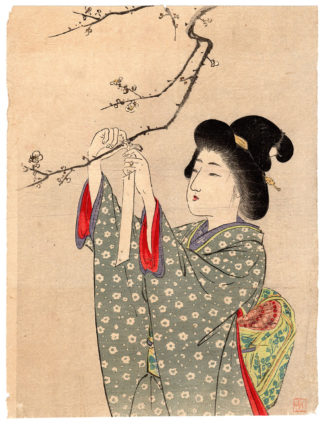