Shirabyoshi were female entertainers. Their profession became popular in the 12th century and they performed for the nobility, and at celebrations. In a period of power and social change, a change in fortune for some aristocratic families resulted in the daughters of these families needing to perform as dancers in order to survive. As educated and cultured ladies, they become a superior group of courtesans noted for their singing, dancing and poetry as well as beauty. Shirabyoshi were recognizable for the outfit they would wear, which was Shinto-inspired: it was a man’s outfit with a tate eboshi (立烏帽子) hat, red hakama (袴) trousers and a a samurai’s sword.

The print on Japanese washi paper (和紙), despite some signs of aging, is in good general condition. 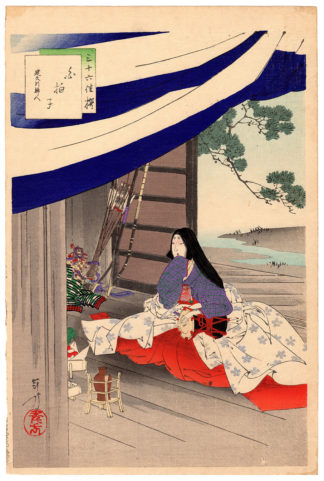