The master calligrapher Ougai Kofude (小筆凰外), author of this refined shodo (書道) work, translates the verb “shinobu” (忍ぶ) as “to have an unshakable spirit in any circumstance”. The ideogram depicted here, which from the second half of the twentieth century entered the Western imagination with the word “ninja” (忍者), is what in historical documents was used to define the shinobi (忍), a shortened form of “shinobi no mono” (忍の者), a person who practices the art of stealth operations ninjutsu (忍術), which is a set of espionage and strategy techniques used since the medieval period of Japan.

By the time of the Meiji Restoration (明治維新) the tradition of the shinobi had become a topic of popular imagination and mystery in Japan. As a result the ninja assumed a considerable role in folklore and legend, and it is often difficult to separate fact from myth.

The work, made on a thick shikishi (色紙) format cardboard with golden edges, is in very good condition. 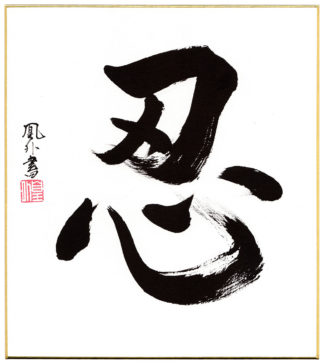