Fascinating large vertical format woodblock print of the shin-hanga (新版画) genre made by the artist Noel Nouet (ノエル ヌエット), entitled “Sensoji” (浅草寺) and depicting a 1936 view of the “Treasure-House Gate” Hozomon (宝蔵門) at the famous temple complex located in the Asakusa (浅草) district of Tokyo.

Noel Nouet (1885 – 1969), poet and painter born in Brittany, made his first encounter with Japanese art thanks to his mother, who collected works by Hiroshige. After meeting various Japanese artists in the Parisian salons, he went to Tokyo as a teacher and began to devote himself to his activity as an illustrator of landscapes, especially urban ones, with a style that immediately became popular and that allowed him to publish his works on many newspapers, magazines and books.

The work, originally produced by the publisher Doi Eiichi (土井英一), the carver Endo Kokyoku (遠藤光局) and the printer Seki Kenji (関健二), is presented here in a fine woodblock reprint in very good condition, made in the second half of the twentieth century. 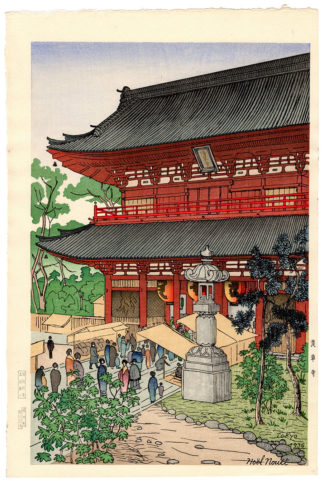