Large horizontal format shin-hanga (新版画) woodblock print, made in June 1940 by the artist Wada Sanzo (和田三造). The work, taken from the series “Occupations of the Showa Era in Pictures” (昭和職業繪畫), is titled “Salaryman” (サラリーマン) and depicts salaried workers aboard a commuter train.

Wada Sanzo (1883 – 1967), painter and costume designer, studied Western-style painting at the Tokyo Fine Arts School (東京美術学校), precursor of the Tokyo University of the Arts (東京芸術大学), where he will become a teacher after also a period of study in Europe. His artistic career was very prolific: he was an establishment artist who also worked for the imperial family and for the government. Collectors of woodcuts appreciate him in particular for the series of prints, of which we present an example here, in which he depicted in a very suggestive way the new occupations in Japan, as well as those that were disappearing.

The print on Japanese washi paper (和紙), produced by the publisher Nishinomiya Shoin (西宮書院) in a limited edition of only 300 copies, despite the right signs of aging, is in overall very good condition. 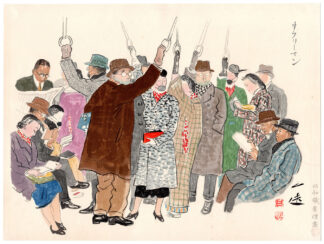