Beautiful kuchi-e (口絵) woodblock print made by the artist Tomioka Eisen (富岡永洗) as the frontispiece of the novel “Rangiku Monogatari” (乱菊物語) by Hirotsu Ryuro (広津柳浪), the famous writer who is credited with the creation of the “hisan shosetsu” (悲惨小説), ie “tragic novel”, genre in Japanese literature. The title of the work, which we could translate as “A Tale of Chaotic Chrysanthemums” is recalled by the yukata (浴衣) robe worn by the woman on the right, decorated with a rangiku (乱菊) pattern: chrysanthemum flowers with disordered petals of various length.

The print on Japanese washi paper (和紙), produced in December 1902 by the publisher Wada Mume (和田むめ), owner of Shunyodo (春陽堂), and by the printer Aoki Hiroshi (青木弘), despite some right signs of aging and in particular a stain visible in the right-hand pane of the illustration, is in good general condition. 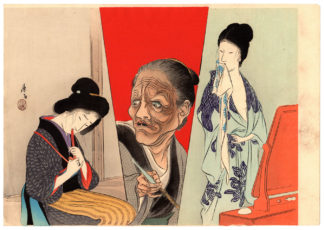