Important original woodblock print of vertical large oban (大判) format made by the artist Kikukawa Eizan (菊川英山) and depicting the courtesan Masaji (真砂地) of the house of pleasure Tsuruya (鶴屋) in the company of one of her two young kamuro (禿) assistants who, as we read in the upper left, were called Hamano (はまの) and Chitose (ちとせ).

Eizan (1787 – 1867) was the most prolific, longest-lived and ultimately the best of the late followers of Kitagawa Utamaro (喜多川歌麿), who attempted to carry on the bijin (美人) style of the master after the death of the latter, occurred in 1806.

The precious print on Japanese washi paper (和紙), produced in all probability around 1810 by the publisher Sanoya Kihei (佐野屋喜兵衛) owner of Kikakudo (喜鶴堂), despite the right signs of aging, is in overall good condition. 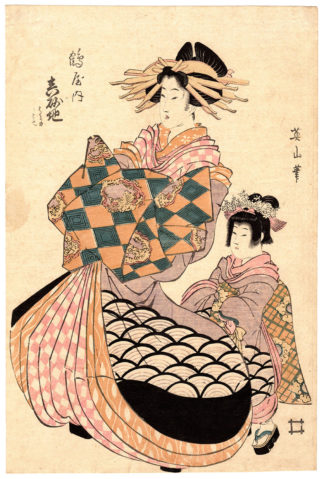 You're viewing: MASAJI OF THE TSURUYA HOUSE (Kikukawa Eizan) $882.00
Add to cart