The word “Wa” is the oldest name of Japan recorded by historical documents. The Chinese, Korean and Japanese writers, until the eighth century, regularly wrote Wa or Yamato with the Chinese character 倭. This character, however, had been conceived by the Chinese with a negative connotation: it indicated the Japanese as the people of “bent men”, that is, submissive, docile, obedient. Around 757 AD the Japanese scholars therefore decided to replace the Chinese logogram 倭 with the current 和.

According to some researchers, the origin of the ideogram 和 can be traced back to two kanji: 禾 and 口, that is the entrance of a military camp and the casket in which the peace agreements were placed. Literally then it presents the act of entering into an agreement on a battlefield but, in the broadest sense that is still used, it simply means “harmony”, “peace”.

The work, made on a thick shikishi (色紙) cardboard with golden edges by the female calligrapher Keisen (恵泉), is in very good condition. 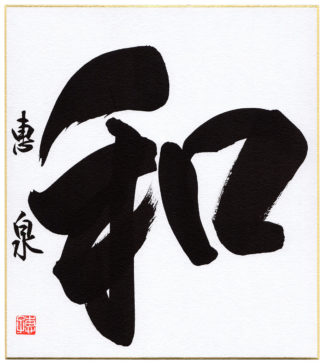