Shin-hanga (新版画) woodblock print of large horizontal format made by the artist Yamanaka Kodo (山中古洞) in commemoration of the 2600th anniversary of the foundation of the “Chrysanthemum Throne” (皇位), that is of the Imperial House of Japan (皇室), the oldest continuous hereditary monarchy in the world.

In the print we see a detail of the Ise Grand Shrine (伊勢神宮), a huge complex, traditionally linked to the Japanese Imperial Family, consisting of over a hundred autonomous shrines in which is also kept the Sacred Mirror (八咫鏡) of the goddess Amaterasu Omikami (天照大御神), a national treasure that makes the shrine the most important sacred site of Shintoism.

The work, printed in July 1937 commissioned by the government, is in very good general condition. 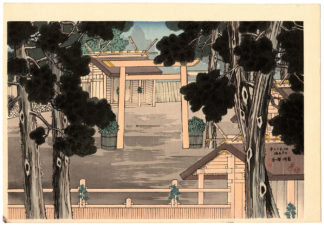