The Empress Taira no Tokuko (平徳子), depicted here in Heian (平安) style with long black hair falling on a magnificent junihitoe (十二単) kimono, became a nun after the death of her six-year-old son in the naval battle of Dannoura (壇ノ浦の戦い). The artist Mizuno Toshikata (水野年方) creates a strong duality with the sumptuousness of the figure in the foreground and, in the background, the simplicity of the ascetic life that she would lead with two other nuns in a hermitage in the northern outskirts of Kyoto (京都).

The kuchi-e (口絵) type woodblock print was made as a frontispiece of the novel entitled “The Jakkoin Temple” (寂光院) by the writer Miyake Seiken (三宅青軒).

The work, printed in October 1901 by the Hakubunkan (博文館) publishing house for the vol. 7 n. 13 of the famous literary magazine Bungei Kurabu (文芸倶楽部), despite the right signs of aging including small spots, is in good condition. 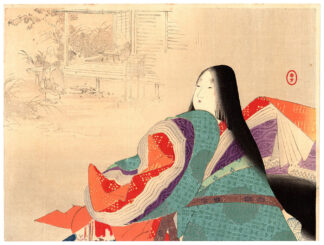