Very rare polychrome woodblock print made around 1900 as a kuchi-e (口絵) frontispiece by the artist Kaburagi Kiyokata (鏑木清方). Within two heart-shaped insets we see a bijin (美人) beauty and a nurse: a figure, the latter, who, following the first Sino-Japanese war (日清戦争) and because of the importance of the tasks carried out with an unprecedented close physical contact with the men, only a few years ago strongly imposed herself in the Japanese public imagination.

Kaburagi Kiyokata (1878 – 1972), a nihonga (日本画) style artist and son of the founder of the famous newspaper Tokyo Nichi Nichi Shinbun (東京日日新聞), was one of the leading masters of the bijin-ga (美人画) genre in Taisho (大正) and Showa (昭和) periods. Disciple of Mizuno Toshikata (水野年方) and Tsukioka Yoshitoshi (月岡芳年), in the early part of his career he devoted himself mainly to the production of woodcut illustrations. But his best artistic efforts were directed to painting, so much so that in 1944 he received the official position of court painter. 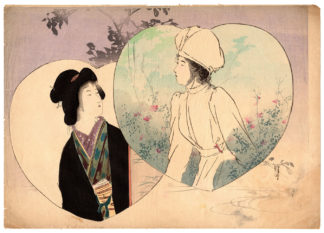 You're viewing: BEAUTY AND NURSE (Kaburagi Kiyokata) $245.00
Add to cart