The novel “A Wife’s Heart” (妻の心) by Tsukahara Jushien (塚原渋柿園) deals with Hideyoshi (秀吉) when he was known as Tokichiro (藤吉郎). Nobunaga (信長) had defeated his brother-in-law, Asai Nagamasa (浅井長政), and had him executed by Tokichiro. Oichi (お市), the widow of Nagamasa and sister of Nobunaga, is reported to be the most beautiful woman in the world. Tokichiro, in love with this fabulous beauty, wants to marry her although he is already married, but Oichi detests him because he had personally killed her husband and son. Tokichiro lies to his wife, Onene (おねね), saying that Nobunaga ordered that they be divorced so that he could marry Oichi.

In this woodcut by Tomioka Eisen (富岡永洗), made as the frontispiece of the aforementioned novel, Onene sits with downcast eyes, lamenting her predicament. As a good and faithful wife and model of female virtue, she feels that she has no choice but to go through with the divorce and that it is her duty, in obedience to her husband and Lord Nobunaga, to visit Oichi and urge her to marry Tokichiro. Her sad and lonely state is reiterated by autumn grasses painted on the lamp shade at her side (cf. Helen Merritt – Nanako Yamada, Woodblock Kuchi-e Prints, 2000, University of Hawaii Press, p. 54).

The print on Japanese washi paper (和紙), produced in February 1901 by the Hakubunkan (博文館) publishing house and taken from vol. 7 n. 3 of the literary magazine Bungei Kurabu (文芸倶楽部), despite the right signs of aging, is in overall very good condition. 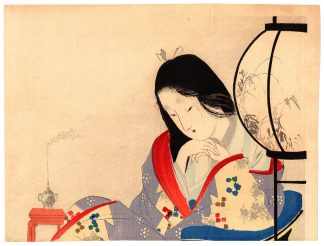