Mizuno Toshikata (1866 – 1908), a pupil of Tsukiyoka Yoshitoshi (月岡芳年), was a traditional genre painter much appreciated by his contemporaries. Active especially in the production of front pages for novels, as well as woodcuts depicting historical subjects and beautiful women, he gathered around him and formed young talents such as Kiyokata Kaburagi (鏑木清方). Member of the Nihon Bijutsu Kyokai (日本美術協会), in 1900 he participated in the Universal Exposition in Paris.

The print on Japanese washi paper (和紙), published in April 1897 by the Hakubunkan (博文館) publishing house for the vol. 3 n. 6 of the famous literary magazine Bungei Kurabu (文芸倶楽部), despite the right signs of aging and some fold marks, is in good general condition. 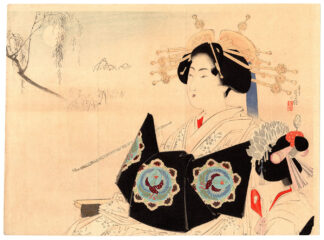 You're viewing: A VOLUPTUOUS ENCHANTRESS (Mizuno Toshikata) $213.00
Add to cart